Are you sitting in your usual workspace as you read this? If not, pretend you are. Are you in a home office? In your employer’s office? A café? An oak-lined library? What kind of desk are you sitting at—or standing at? Or is it the dining table? Or is your laptop balanced on your knees?

Do you have two monitors? Three? Is there an ergonomic keyboard that doubles your productivity? Is there a favourite mug always on your desk, full of chamomile tea?

Are you by a window with a lovely view? Is there a bookcase within reach, or are all your go-to resources online these days? How far do you have to go for snacks? Are there by any chance … cats?

At Editors Kingston, we often share about what we do; for our May gathering, we thought it would be fun to talk about where and with what. Come join us and share whatever details you’d like about your workspace.

Why not snap a photo of your space, and we’ll have a slide show? Email your pic to Stephanie Stone at sstone4@cogeco.ca or post it to the Editors Kingston Facebook group by Tuesday, May 7.

You can do this even if you aren’t able to come to the meeting! The more workspaces, the merrier.

You knew Anastasia Riehl’s presentation on Canadian linguistics had to include this slide….

As editors, we’re trained to intervene in written language, whenever needed, to maximize its effects. You’ve heard of helicopter parents? Editors are helicopter readers, always poised, proverbial red pen at the ready, to tighten awkward phrases or tidy inconsistencies of spelling.

But if we’re the zookeepers of language, linguists are more like animal biologists – they watch words just as closely but do so while peering through the bushes, trying not to spook their prey. Linguistics seeks not to correct usage but to draw conclusions about it – although editors, like all who work with words, have much to learn from what linguists have to say.

To find out more about some cutting-edge linguistic work happening right in our own back yard, on April 10 Editors Kingston welcomed Anastasia Riehl, director of Queen’s University’s Strathy Language Unit, to speak about “Exploring Canadian English with Linguistic Corpora.” The unit is a research unit founded in 1981 by Queen’s alumnus J. R. Strathy, who, Anastasia says, observed that “English departments tend to focus on literature instead of language.” Strathy felt that looking at English – and Canadian English in particular, compared to other Englishes spoken around the world – was important. Today, thanks to his bequest, the Strathy Language Unit (queensu.ca/strathy/) is internationally renowned as a centre for Canadian English linguistic studies.

What is Canadian English? It’s typically described as a mixture of US and UK styles, but of course, it has aspects all its own. And it contains multitudes: British English, American English, Canadian French, Aboriginal languages, and a host of immigrant languages from around the world influence what English is in Canada. The Strathy website says, “We are interested in English as it is used by all speakers throughout the country, not just those from a particular region or with a particular background. The variety we find within communities and throughout the country is in part what makes the study of Canadian English such an engaging one.”

What Does the Unit Do?

Probably the Strathy Language Unit’s most prominent achievement – and the one that intersects most directly with the world of editing – is the Oxford Guide to Canadian English Usage (full disclosure: I worked on this and other Strathy projects while a student years ago). Falling “somewhere between an encyclopedia and a dictionary,” according to Anastasia, this usage guide uses real examples gathered from quoted Canadian English to explore thorny style questions and offer guidance to help Canadians feel more confident in their writing and speaking, particularly in situations where existing US and UK guidebooks don’t quite fit.

The Strathy Unit has also produced series of occasional papers, digital publications, corpus projects (more on this later), and an online bibliography for the study of Canadian English (4,000 sources to date). It supports Canadian English courses at Queen’s and also hosts and supports conferences. (One upcoming will focus on “nonbinary pronouns” – not just the generic singular “they,” with which editors must often grapple, but also pronouns preferred by those not identifying with a particular binary gender, an increasingly important social and grammatical issue of recent years.)

A number of exciting projects are in progress. One is a student project on Canadian slang that will include videos on YouTube (“everyone wants to work on slang,” Anastasia says). Another project is a “digital voice map,” allowing contributors to upload samples of their own speech and listen to others, all pegged to location. The unit also contributed to a recent mammoth scholarly achievement, the second edition of A Dictionary of Canadianisms on Historical Principles, which charts changes in Canadian English over time. (To keep up, check out the Strathy blog at queensu.ca/strathy/blog.)

Much of this work is underpinned by the Strathy Unit’s secret weapon: its corpus. A corpus is essentially a large sample of language that meets the requirements of researchers: in this case, multiple examples of English as written or spoken by Canadians, in different registers and contexts – formal, informal, academic, creative, and so on. By gathering enough examples of usage, a corpus allows language use to be studied systematically, in statistical fashion, rather than based on assumptions that may or may not be correct.

Anastasia recounted a story about an early meeting of the Freelance Editors’ Association of Canada (FEAC), at which the editors attending were polled about “preferences when editing for the Canadian market.” As it turned out, she quoted, “the response of a handful of editors to the set ‘mould/mold’ was quite dazzling and typified the confusion, if not mayhem, that we occasionally encounter” (Lydia Burton, 1982, “In search of a Canadian style,” Scholars Publishing 13.4.347–54). The twig members were amused to inform Anastasia that FEAC had ultimately morphed into Editors Canada, and thus the meeting where this polling took place was a precursor to the one at which she was speaking!

Today, with access to a resource like the Strathy Corpus, national preferences can be explored much more precisely. Targeted searches show exactly how often writers use “travelled” compared to “traveled,” say, or which adjectives most often complement which nouns. The group was pleased to learn that the Strathy Corpus is available online at www.english-corpora.org/.

Most linguistic work on Canadian English today, Anastasia says, would be termed “variationist sociolinguistics.” Speaking simply, this means looking at, first, how language changes over time and, second, how it varies based on social factors like gender, race, region, education, class, ethnicity, and so on. By comparing speech patterns of, for instance, young and old speakers, we not only gain insight into how language has changed but can also start to make guesses about how it will change in years to come.

The bulk of Anastasia’s presentation looked at a more specific corpus she has been assembling. Because most of the larger Strathy Corpus is written English, Anastasia sought to develop a unique spoken corpus, gathered in partnership with the Wolfe Island Historical Society. Comprising over 90 hours of interviews (with respondents between 55 and 97 years of age), totalling over a million words, the Wolfe Island English Corpus (WIEC) is starting to reveal fascinating conclusions about how the rural island life of the past has shaped language use among residents. Spoken informal usage is the most difficult to capture without subjects becoming self-conscious, distorting their true way of speaking. 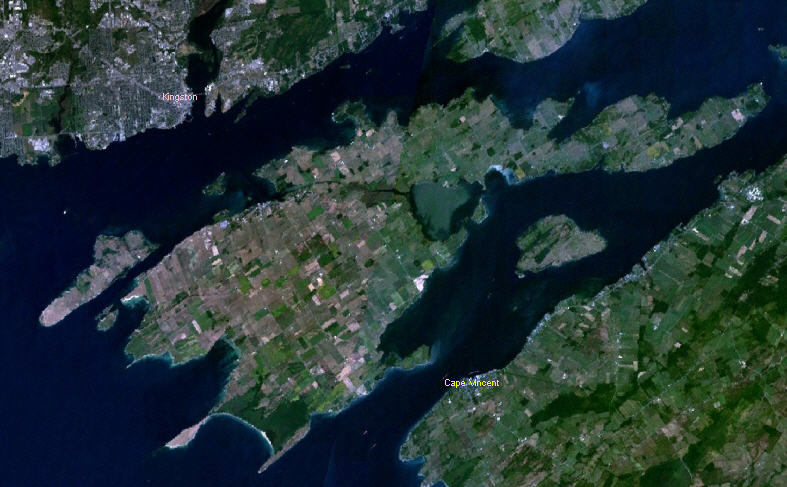 Today the island links up easily with mainland Kingston, but for most of its history, its four separate communities saw very little interaction, and islanders were likely more closely connected to Cape Vincent, New York, than to Kingston. Pre-ferry, a crossing in winter meant travelling over ice by horse and later by car. Farming, fishing, cheese-making, and boat-building industries gave otherwise specialized vocabulary common currency on the island.

Analysis of the material in the corpus is only just starting, but Canadians will surely be interested to know that “eh” – a “discourse particle, seeking confirmation or analysis” – constitutes a full 0.21 per cent of the WIEC. How that, and other vocabulary, compares to other regional corpora across Canada is sure to turn up fascinating insights into language formation and how – and why – the places we live in help to determine how we speak.

In the brief recording excerpts Anastasia played, we also heard how what we as editors would likely consider “non-standard” usage brings a richness and evocative musical tone to language. For instance, one dramatic story about a horse almost drowning ended with the memorable phrasing “after that I never had any time for crossing the ice none” – no doubt a reminder that editing that removes style is not good editing at all.

Do you have ideas about how a corpus could be useful in your editing work? Contact Anastasia Riehl at the Strathy Language Unit, Queen’s University: riehla@queensu.ca.

The meeting included, as usual, some national announcements from coordinator Elizabeth d’Anjou:

Also, past webinar recordings are available for sale (you get a download of the video and audio session to watch any time, plus a copy of all the slides and any handouts). Great training at a bargain price! Some more are in the works (including, soon, Elizabeth’s own “Top Ten Things I Wish I’d Known When Starting as a Freelance Editor”); check the webinars website for updates.

Coming Up May 8: Workspace Show-and-Tell

We at the twig often share about what we do; for our May gathering, we thought it would be fun to talk about where and with what. Come join us and share whatever details you’d like about your workspace.

Does your workspace include easy access to snacks? Our twig meetings do!

Tell us about your desk/chair/monitor(s)/local café/cubicle. Snap a photo if you like and send it to Stephanie Stone (sstone4@cogeco.ca) or post it on the Facebook group’s page — we’ll have a slide show.

(Feel free to participate even if you can’t make the meeting!)

The Strathy Language Unit was established at Queen’s University in 1981 with a mission to study standard English usage in Canada. Since that time, the unit has supported a variety of initiatives to examine Canadian English from diverse perspectives as well as the notion of a “standard” in an evolving linguistic landscape.

We are extremely pleased to be welcoming Dr. Anastasia Riehl, Director of the Language Unit, to join us on April 10 to give a presentation on “Exploring Canadian English with Linguistic Corpora.” Given that the Unit is hosted at Queen’s University (it was founded with a bequest from alumnus J.R. Strathy), it seems only natural to have its unique work as the subject of an Editors Kingston gathering.

In her role as Director of the Strathy Language Unit, Dr. Riehl pursues and supports projects that explore Canadian English from linguistic, social and historical perspectives. Her other areas of research interest include phonology (sound patterns) and endangered-language documentation.

Hear Elizabeth’s report from the ACES conference in Providence, where 800+ American editors gathered for three days of editorial hijinks and general word nerdery, and where she sold a copy of Editing Canadian English 3 to the New Yorker’s copy editor emerita, Mary Norris.