Our meeting on January 10 kicked off the new year with a night of brainstorming, advice, and networking with fellow editors.

Ellie Barton shared her 2018 marketing to-do list, which was developed with guidance from Adrienne Montgomerie using her workbook, Freelance Marketing Action Plan for Editors. Ellie’s list included her big goal for the year—to get editing work from trade publishers—as well as twenty additional goals, with the aim of strengthening not only her marketing strategies but her editing skills as well.

Highlights of Ellie’s list include updating her Online Directory of Editors profile, enrolling in workshops to target specific skills or topics, develop “cold call” messages tailored to specific contacts, registering for a conference (ACES in April and Editors Canada in May are two options), creating an elevator pitch, and requesting testimonials after each editing job.

Ellie has also decided to designate two hours a week to focus on marketing, commenting that in order to make change in your work you must make time to market yourself. She suggested setting priorities beforehand to guide and structure your dedicated time effectively and to achieve those weekly marketing goals successfully.

Some of Ellie’s other social media goals included improvements to her website such as refreshing the theme, employing keywords, planning a topical series of blog posts, and engaging in other blogs by commenting once per week. Participating in other people’s blogs is a great way to make some online connections and may even lead to opportunities to guest post, thereby providing further exposure for your editing work. 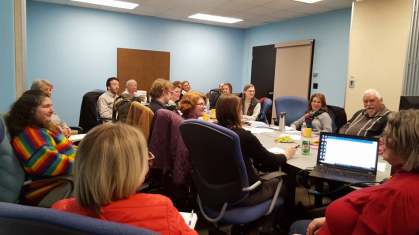 Another effective marketing strategy is networking with other editors! This method was put into practice as we connected with each other over coffee and cookies during the break to discuss our work and experiences with each other. Networking with fellow editors over coffee or lunch, or at events is not only enjoyable but helpful for fostering working relationships and gathering resources. Ellie noted that volunteering can also be both an effective marketing and networking strategy. For example, volunteering at the Editors Canada conference connects you with other editors; Ellie specifically suggested introducing speakers, which gets you in front of people without having to give a talk yourself if you are unable to.

Ellie’s many suggestions prompted others to share their insights, experiences, and suggestions for marketing as an editor, demonstrating that we might just be each other’s best sources for ideas. What’s on your to-do list for this year?

Join us on Wednesday, February 14, for an ECE3 book club! We will work through a couple of chapters—Chapters 2 (“Inclusivity”) and Chapter 4 (“Hyphenation”)—from the new edition of Editing Canadian English! The book is available both in print and as an eBook.

The New Year is a time for resolutions, fresh starts and reboots—a good time to think about your editing business goals for 2018.

Do you want more clients, different clients, higher-paying clients? Are you hoping to land a full-time or part-time job that uses your editing-related skills? What skills would you like to develop or hone? How could you contribute meaningfully and frequently on social media? What is number one on your “to do” list?
Our meeting on Wednesday, January 10, will be a brainstorming and networking session about marketing and job finding. Ellie will share her “to do” list, which she developed using a new workbook by Adrienne Montgomerie, Freelance Marketing Action Plan for Editors. Adrienne has kindly agreed to allow Ellie to provide you with six pages from her workbook.
Let’s start 2018 with a New Year’s Wish List!

Editors Kingston hosted this workshop on Saturday, November 18, at the Tett Centre for Creativity and Learning. It was led by Adrienne Montgomerie, who is an experienced instructor and knows Word inside out.

The goal of the workshop was for attendees to learn skills that make online revising faster, more accurate, and efficient—using wildcards, macros, Track Changes, shortcuts, styles, and more. By applying our new-found skills, we would be able to reduce the mechanics and tedium of revising and editing so that we could focus on developing our ideas and honing our arguments.

A week before the seminar, Adrienne asked us to send her a list of topics we wanted to cover, and she amalgamated them into an overall list for the day. We also referred to her recently published and indispensable book, Editing in Word 2016, which she provided (in PDF format) as part of the seminar fee.

Adrienne began the day on the topic of macros because it can be the hardest and she wanted to discuss it off the top, while we were fresh. That was an interesting approach, and it worked well. She was a good instructor—explaining Word features clearly, setting the right pace, and giving us time to practise what we’d just learned. She also accommodated users on both Macintosh and Windows platforms as well as different versions of Word, and she did that flawlessly.

The seminar went very well, and we learned a lot. It was a small group, which helped people feel comfortable, and it allowed Adrienne to answer all our questions. We covered almost everything on Adrienne’s list of topics, and there was still time for a long lunch and an afternoon break.

We were in a room on the lowest level of the Tett Centre, down the hall from the café, so people could easily get a coffee or tea. And lunch was delicious—a small buffet of sandwiches and salads, with huge, decadent cookies for dessert.

Rick Revelle began his talk at the November 8 Editors Kingston gathering with a welcome song to the accompaniment of a cedar-strip drum, setting a lively tone that continued throughout the evening.

A natural storyteller, Rick shared many tales of his life and work, starting with the story that led to his career as a writer: his discovery as an adult, based on an offhand discussion with a cousin about deer-hunting licences, that his family was Anishnabe. (For more on Rick’s background and books, see our last blog post, and this interview in the Miramichi Reader.) This late-life reconsideration of his identity inspired Rick to research his Indigenous heritage, and he soon became fascinated by the history he learned and wanted to share it—in story form. His YA books (I Am Algonquin, Algonquin Spring, and Algonquin Sunset) have been compared to the Little House books for the way they bring a historical period to life through a wealth of accurate, practical detail.

Rick also graciously answered many questions about his writing from a professional point of view, especially as it related to the editing process.

He expressed admiration for and gratitude to editors in general, and reported having an excellent relationship with most he had worked with. “If you’re a serious writer and you want to get published, pay an editor to help you,” he said (earning a round of applause). He cheerfully leaves copy-editing decisions to the professionals. “I don’t even bother looking at all the little tracked changes. I just read the comments. If there’s anything important, the editor asks about it there.” He was grateful to an editor who fact-checked a description of the Richelieu River and corrected it so the flow was in the correct direction.

He did recount problems with one editor who asked him to cut material that Rick felt was crucial to a book. This included some violent episodes and some supernatural aspects, both of which had been included with careful intent. “It would have gutted my story” to remove these elements, Rick said. “Luckily, it was my second book; I knew what I was writing about. I had done my research.” He felt confident enough to push back firmly, and the material stayed.

The level of research Rick puts in impressed even this audience of professionals, who deal in accuracy for a living: the table filled with approving nods as he described reading Champlain’s original chronicles, and there were a few gasps when he mentioned the five hours he’d spent investigating how twelfth-century Algonquins would have kept away mosquitoes. (Of course, there were also cries of “So, how did they?” The answer turns out to be burning sage and smearing themselves with an ointment containing golden seal.)

Also of great interest to editors was Rick’s discussion of the Indigenous attitude to story ownership. Whenever someone tells him something he thought might be a good inclusion in a book, he always asks if he can use it. Usually the answer is “yes,” but if it’s not, he says, there’s no question of betraying the teller’s wishes. “It’s not my story to tell.” Rick advised the editors in attendance to keep this aspect of Indigenous culture in mind.

Another piece of advice he had for editors working on Indigenous publications: “Ask whether the text has been vetted by elders.” Not knowing any better himself at first, he said, he didn’t think to include this step for his first book (and, as a result, nearly missed out on a distribution opportunity for Indigenous-focused books that has proved valuable for his novels). Now, he wouldn’t think of skipping that step, and even proudly includes printed comments from several elders at the end of each book.

There was some lively discussion of language tools. All three of Rick’s books feature glossaries of Anishnabe (Algonquin) terms, and the latest includes a pronunciation guide. When Rick mentioned the Mi’kmaq “talking” online dictionary, the group didn’t hesitate to try it out (with a little help from the Ongwanada Resource Centre’s Wi-Fi and Adrienne Montgomerie’s iPhone).

The evening was a success, both as a Twig gathering (a good turnout of some 13 people, including a visitor who attended as a long-time fan of Rick’s writing) and as an educational opportunity for Kingston editors.

Our meeting on Wednesday, January 10, will be a brainstorming and networking session about marketing and job-finding. Twig coordinator Ellie Barton will share the “to do” list she developed using a new workbook by Kingston editor Adrienne Montgomerie, Freelance Marketing Action Plan for Editors.