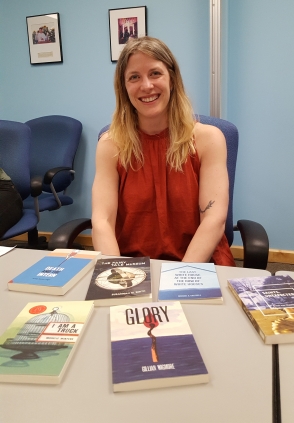 At this month’s meeting we spoke with Leigh Nash of Invisible Publishing. Leigh summarized her career in editing and publishing and then discussed the various quirks and challenges of running a nonprofit small press.

Leigh describes herself as a “professional magpie,” having bounced between multiple editing assistant jobs and a few lateral moves into yoga, legal documentation, and organizing sled-dog competitions. She eventually landed at Invisible when it was located in Marmora, Ontario (where it had moved from its original Nova Scotia location, seeking the better funding opportunities in Ontario). Invisible relocated to Picton in 2017 and Leigh gradually slid into her current role as its sole publisher.

Prompted by questions from Ellie and the group, Leigh gave us an overview of the process at Invisible Publishing. Invisible’s status as a nonprofit press supported in part by public funding means it can focus on first-time authors and offbeat, experimental projects like Fairy Tale Museum by Susannah M. Smith — a poetry-short-story-novel anthology… thing.

Its small size, however, means a press like Invisible will always be the “farm team” for the larger publishing landscape; successes like Giller-nominated I Am a Truck by Michelle Winters are likely to carry their authors away to larger commissions at the big publishing houses.

Leigh also told us a bit about Invisible’s approach to working with authors. She discussed the process of finding the right editor to help a new author develop their voice, and how that often means being able to recognize when one is not the right editor for a given work. Leigh said the number-one thing she looks for when evaluating a new manuscript is a distinct voice — minor details like plot and theme can be fixed later!

This emphasis on authorial voice is also reflected in Invisible’s approach to design: authors are given direct input on the cover art and designs. This is evidently working out well, since all of the books Leigh brought to show (and give to!) us were gorgeous.
Talking to Leigh offered some key insights into an area of publishing and editing that many of us are unfamiliar with. Personally, I was pretty intrigued by the work Invisible is doing and am looking forward to reading the copy of Fairy Tale Museum I managed to snag.